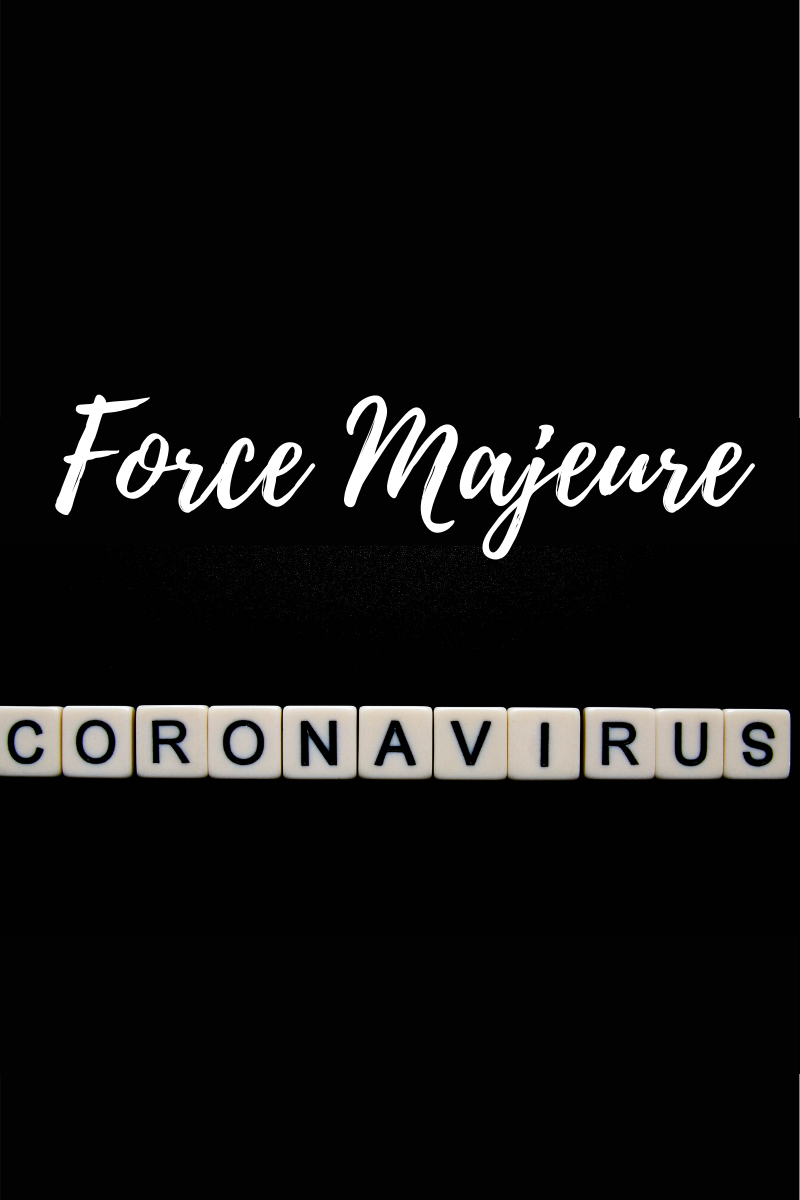 Before I delved right into the how’s of the many clauses of a contract, I thought of starting with the one which is on everybody’s mind these days – Force Majeure. Force Majeure, which is usually a boilerplate clause inserted without much thought as to its language and import, has emerged as the pivot on which all the contracts are standing today during the unprecedented outbreak of Covid-19. The havoc it has wreaked through a medley of death, lock down and curfew has put tremendous pressure on performance of contracts worldwide. From the looks of it, we are at the precipice of numerous disputes which are threatening to arise out of interpretation of this clause in the post-Covid era. What is done is done, but we can learn from the various ways our contracts have been effected by this pandemic and learn how to draft an airtight Force Majeure clause for our future use.

Following are the 5 important considerations from both the perspectives of an affected party and a non-affected party, to keep in mind while drafting a Force Majeure clause:

Whether you would want to define ‘Force Majeure’ narrowly or widely depends on your obligations under the contract. If your obligation is to provide a service or procure goods and are likely to be more affected by a Force Majeure event ie. an effected party, it’s in your interest that you expand the scope of events to which Force Majeure will apply – by including the phrase ‘an event beyond the reasonable control of either party which prevents them from carrying out the obligations under the contract…’

However, if you are receiving a service or good under the contract, you will most likely be the ‘non-affected party’. In that case, your endeavor should be to narrow down the definition and only provide a list of events which would qualify as ‘Force Majeure’.

In contracts which didn’t list ‘epidemic’ or ‘disease’ in its list of events but had the above mentioned phrase, the affected parties have been able to claim the Government-mandated lockdown as an ‘event beyond its control’ to invoke the Force Majeure clause. So before you sit down to draft a Force Majeure clause from scratch or while vetting an existing one, it’s important to check whether you would most likely be the affected or the non-affected party if such a situation arises.

A good Force Majeure clause should have a list of all probable and identifiable events that can prevent the contract from being carried out. Apart from ‘Acts of God’ which means events of natural calamity like flood, tsunami, earthquake, volcanic activity, hurricane, typhoon etc, one can include any and all types of events in this list viz terrorism, war, riot, fire, explosion, epidemic and so on.

The endeavor of the non-affected party should be to keep the list short and not let events like labour unrest, strike, lockdown, increase in price in raw material and such man-made events be made part of it. The affected party should imagine any and every event that can derail their commitments and have them included in this list of events.

Many a times, we keep on adding events in our enthusiasm to make the clause broad, but do stop and give it a serious thought whether you need to do so or not. Doing so will vastly improve the way you would draft your Force Majeure clause.

3. Conditions to be fulfilled

It is always a good idea to impose an obligation on the affected party to notify invocation of the clause within a specified period from the date of happening of such event. In the absence of such an obligation, there is a chance that a party facing delay in carrying out its obligations or at the risk of being charged to pay damages, exploit the Force Majeure clause and invoke it belatedly and as an afterthought.

Invocation of Force Majeure can be accompanied with a pre-existing ongoing breach or delay in performance, so it is imperative to segregate the time frame from when actual Force Majeure event occurred. That’s a key point to keep in mind while drafting a Force Majeure clause.

The single most important benefit of a Force Majeure clause is to provide a defense of non-performance to the affected party and save it from consequences of breach of contract. Therefore, in order to reap the benefit of this clause, it is fair that there should be an obligation on the affected party to mitigate the effects of the Force Majeure event on its performance of the contract.

Many contractors carrying out civil construction claimed Force Majeure January onwards, citing delay in procurement of materials from China. If it can be proven that this delay could have had no appreciable impact on the timelines only if the Contractor had tweaked its deliverables and accomplished other commitments, the claim of Force Majeure would not be valid. Another good idea is to provide for keeping of records by the affected party during the Force Majeure event to sustain its claims. The FIDIC Model Contracts provide for such a provision, which would make it very difficult for the party claiming Force Majeure to fake it.

After laying down the definition of the term, listing out the events which would classify as force majeure, stating the obligations for notice and mitigation, next comes the most important part of the clause – laying down the consequences.

Most often, Force Majeure clauses intend to suspend the contract rather than cancel or void it completely. One of the major consequences, therefore, is to extend the timeline of deliverable or the term of the contract by the number of days lost in the Force Majeure event.

A lot of contracts are of such nature that parties might want to renegotiate and agree on alternate means to perform, instead of suspending or terminating the contract. A clear mention of the same in the clause would be beneficial in such a scenario.

Another consequence of Force Majeure is termination if the event has continued for a specified time period. The duration of that time period is solely dependent on the kind of contract one is contemplating. It is prudent that the termination right should remain with the non-affected party only, else there is a scope for misuse. From the viewpoint of the affected party, it will be in their interest to negotiate for a right of termination if the Force Majeure event continues for a longer time period since it would be unfair to bind them to a contract not capable of being performed.

The other important factor to consider when you set out to draft a Force Majeure clause is the costs associated with a Force Majeure event in the form of idle manpower, idle machinery etc. These will drive up the cost of the contract for the affected party and they would want to claim such costs. For the non-affected party to avoid such a claim, it should be clearly mentioned in the clause that no claim of costs or financial assistance would be entertained.

Keeping all the factors in mind, let’s draft a sample Force Majeure clause now. Needless to say, this will require a suitable adaptation depending on the context of the contract.

1. If either party is unable to carry out his obligations under this Contract due to

(i) any natural catastrophe like earthquake, hurricane, tsunami, typhoon or volcanic activity,

(iv) riot, commotion, labour unrest (not attributable to the party invoking the clause),

(v) plague, epidemic, pandemic, or outbreak of a communicable disease leading to extraordinary restrictions including quarantine or movement of people or goods,

or any other event beyond the reasonable control of either of the parties resulting in an inability, in spite of due diligence of either party in performing its obligation in time, this Contract shall remain effective, but the obligation which the affected party is unable to carry out, shall be suspended for a period equal to the duration of the relevant circumstances and the time period of the Contract shall be extended for such time period.

Provided that the affected party gives the non-affected party prior written notice within 15 days, describing particulars of the inability including but not limited to the nature of occurrence with its accepted duration and the steps which the affected party is taking to mitigate the impact of such event and fulfill its obligation. Consequence of Force Majeure will only apply from the time of receipt of such notice by the other party. Rights accrued to either party (including payment obligations) prior to the invocation of Force Majeure shall remain enforceable.

The affected party shall give notice to the other party once it ceases to be impacted by the Force Majeure.

2. Notwithstanding anything contained to the contrary it is clarified that economic hardship, non-availability of material, labour and transport shall not constitute Force Majeure.  It is further clarified that any claim for costs or financial assistance arising out of a Force Majeure event shall not be entertained by the non-affected party.

5. If the affected party has performed part of its obligations under the Contract, it shall be entitled to claim consideration proportionate to its performance from the non-affected party post such termination. No claim for loss of business or other costs shall be entertained.

Of course, this clause is capable of being expressed in a variety of ways and the above is only a sample to give you an illustration.

Do you know any other way to draft a Force Majeure clause? Do comment below and let me know your thoughts.

If you are wondering why you should invest so much time and energy in drafting a Force Majeure clause from scratch when plenty samples are available in many templates, read my post on Why You Should Learn How to Draft a Contract.

If you enjoyed reading this post, please spread the word easily using the following share buttons. It will mean the world to me.